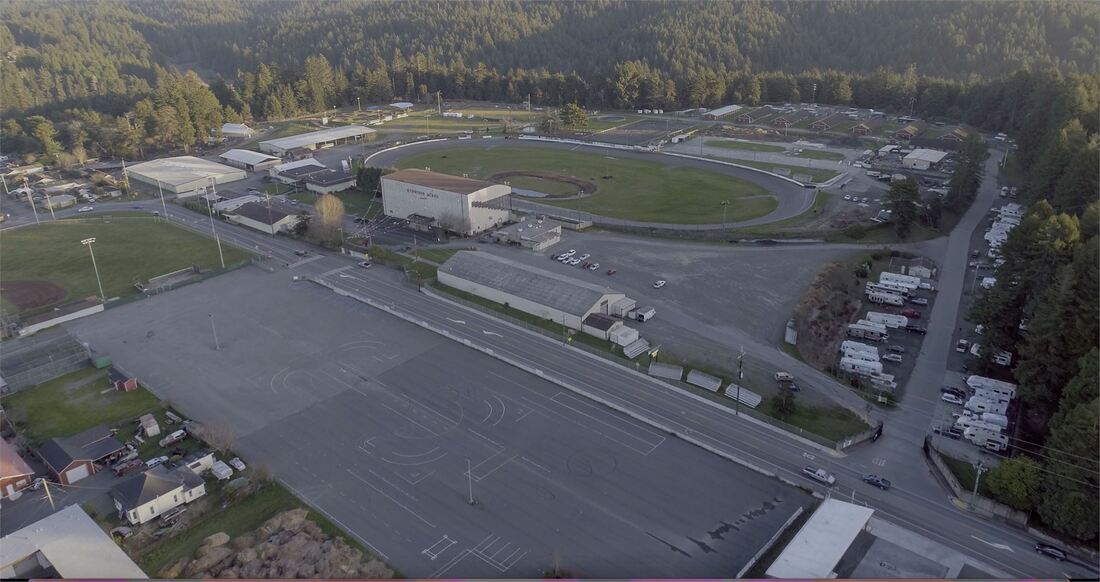 On a beautiful late September day in 1937, and spurred on by growing popular public interests in horse racing, what was once 40 acres of stump-covered ground opened for the first time as the City of Eureka’s local agricultural exposition and racing plant of the Ninth Agricultural Association. The Humboldt Standard reported that the $50,000 venture was, “one of the most magnificent plants of its kind in the entire county.” For the official opening a grand parade took place featuring show horses, race horses, and livestock in a procession leading to the race track and moving towards the track's finish-line which stretched out in front of the grandstands. A large blue ribbon draped across the finish line and was cut signifying the official opening of Redwood Acres Fairgrounds as the four-day event began. An admission to the Fair that first year was 50 cents per person, and even city offices, schools, and businesses closed at noon so everyone could attend. Having yet to construct any buildings on the grounds, a huge tent was erected to shelter the 120 Humboldt firms and local vendor’s displaying exhibits of floriculture, horticulture, agriculture, as well as local products popular at that time.

History of the 9th District Agricultural Association fair goes back to 1880 and was formed and operated originally in Rohnerville for 16 years. For a while, between the years of 1899 until 1904, the 9th District Agricultural Association Fair operated and conducted business at the Occidental Pavilion at Second St. and A St. in Eureka. In 1941 the Redwood Acres Fair (as with most fairs in the country) closed due to WWII and returned to business as usual once peace was restored.
Eighty-three years after Redwood Acres Fairgrounds opened, we remain a thriving community resource within Humboldt County, bustling with wholesome family fun, unique opportunities, events, and positive local growth. The Fair remains firmly rooted to its agricultural base and is very active in the today’s evolving business environment. As such, we support farming, livestock, fisheries, resource stewardship, and provide a valuable resource for agricultural education and activities. Redwood Acres has embarked on an adaptive path of positive renewal that will enhance and guide our fairgrounds and events facility, and thus enable our ongoing mission of community support, while remaining a safe, and enjoyable venue for our patrons.